For this tutorial i Will have the worded directions along with the exact keystrokes it takes todo get the step done. If you are Fluent enough with Blender you may not have todo look at the keystrokes line. Each step within the keystrokes line Will be highlighted as such:example. Arrows Will indicate that you should be following a menú Path.

Lately i have found myself wanting todo make a string of repeatable Items and that are evenly spaced. So, the first thing that i thought of doing was todo go and use an array. Great. Arrays are perfecto for a row of Items but you ned a bit more todo make that row curved. I used todo go th rouge the process of setting up the array, applying the array, then moving a rotating each of the arrayed objects one by one. Eventually i got fed up with it and tried out a process i knew about (and should have taught myself much earlier.) but i had never actually done. Using curves are very helpful in doing this same sort of thing but is much easier todo make look god and easier todo edit. Below you can se the sort of thing i am talking about.

Ok, let go and make our Path. First of, open up Blender if you havent already. If you have the default Cube, remove it, then go into top view and add a plane. If you want todo edit the plane in any bien or use a diferent object in place of it, you may, y only choose the plane so it would be easier todo se what we are doing.
7 (top view), add->Mesh->plane;.

Now that you have your object in place we now want it todo repeat itself. For this we use an array modifier. If you open up the editing buttons there is a box that is labeled modifiers. Youll want todo select your object and click on add modifier and select array. After you select this you should se ha copy of the plane appear in the 3d window and a bunch of settings in the modifiers box.
f9, click add modifiers, click array;. 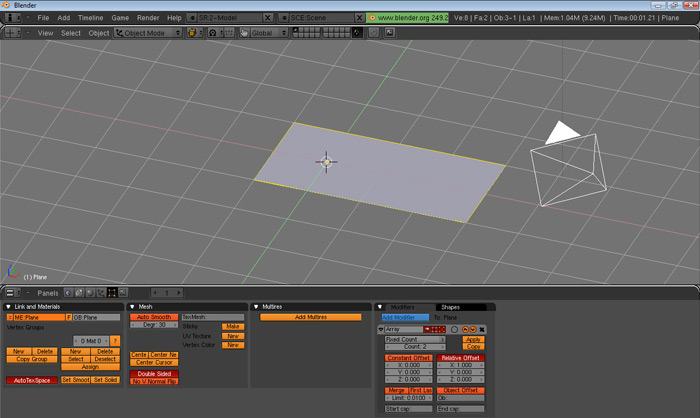 Before we move on, let change a few settings with our new array. For now all we Will do is change the count and then adjust the relative offset just a bit. I changed the count todo 6 and then made the relative offset in the x direction 1.200. Fel free todo change any setting todo test them out a se what they do. With a single array you can only really make a straight line of repeating objects, you cannot curve them. Here what i have right now.
change count todo 6, change x under relative offset todo 1.200;. 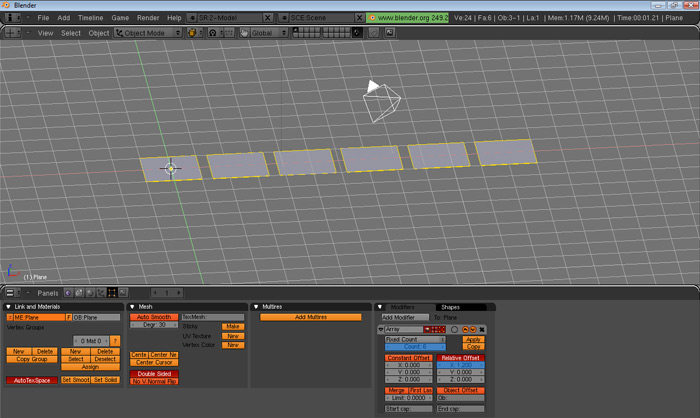 Now we want todo make our plane follow a curved Path. Since we cannot do this with just an array modifier we Will ned todo add a curve todo our scene. So what we are going todo do is go into the top view and add a Bézier curve. Once you have the curve in there, go into Edit Mode and pull one of the ends beyond the end of the array of planes and make it into an obvious curve. If you have never used a curve before, y suggest you mess around with editing it until you get the hang of making some curves. You do not have todo make it exactly line mine, or Even have it resemble what i have, y just suggest making a big curve so you can se that this is working.
7, addácurveábézier curve, go todo Edit Mode, edit your curve;. 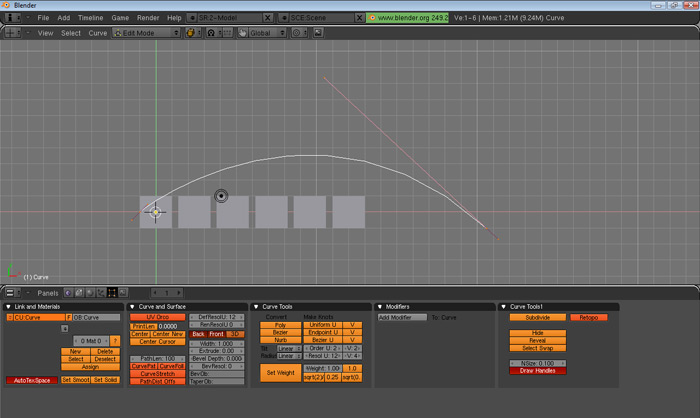 Since we have our curve and our array, we want our array of plane todo follow along this curve. So, what we ned todo do todo make this happen is todo add a curve modifier. Go bak into object mode and select your array of planes. Then you Will want todo go bak into the editing buttons, into the modifiers box and then hit add modifier. Once you have done that, select curve. The settings for this modifier should appear below the array modifier settings. In the ob field we want todo enter the name of the curve. By default, mine was named curve, and that is what i would type into the ob field. Once you have done that, you should se something like below.
object mode, f9, click on add modifierácurve, type the curve name into the ob field;. 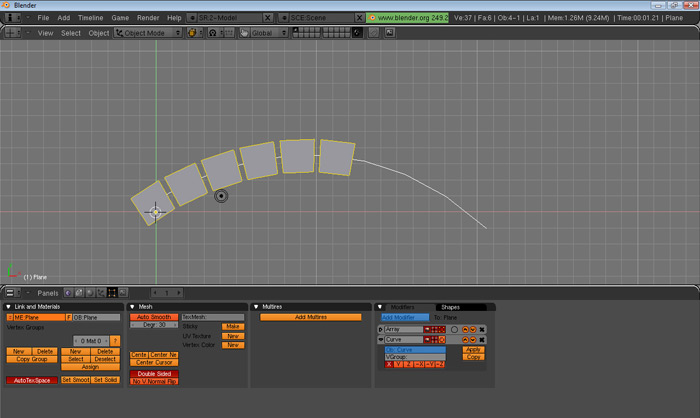 And there you have it, an array that follows a curve. If you have the same sort of results that i do, you may want todo make your array of planes todo follow the curve until it ends. To do this, you Will want todo go bak into the array modifier settings and then click on the fixed count setting. There Will be thre choices, one of them being fit todo curve length. Select it. After you do that you Will have todo specify the curve that the array Will follow, which is the same name we entered into the ob field before. After that you should se the planes repeat until the end of the curve. However, chances are it Will not perfectly match up with the end of your curve. In most cases there Will be a Gap because it Will only add another copy of your object if it has enough rom on the curve for it.
change fixed count todo fit todo curve length, type the curve name into the ob field;. 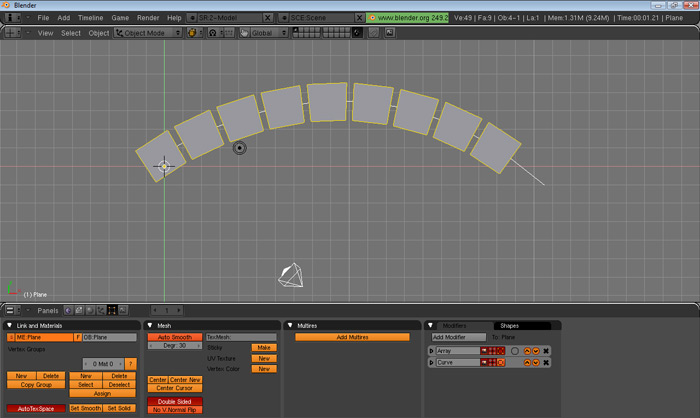 Now you have an easily editable Path of repeated planes at your disposal. You can now select your curve, go into Edit Mode and edit it as much as you like and the planes Will appear as they have rom. There is still a restraint with this though. As of now you can only edit the curve in two dimensions. To fix this, go into the editing buttons with your curve selected and look into the curve and surface box. In there you should find a button that is labeled 3d. If you turn that on you Will be able todo edit your curve in all thre dimensions.
f9, turn on 3d;. 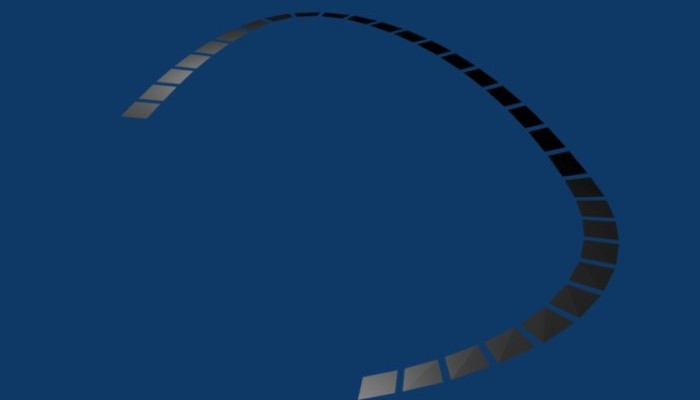 There are plenty of other things you can do todo with curves. Let say you want an object todo go along the full length of the curve without any gaps or any space on either end. The first thing that you have todo do is todo bak into the array modifier settings and change the x value under the relative offset todo 1. This Will remove the gaps that are between each of the objects. Next we want todo make the Items stretch todo the end of our curve. To do this, select your curve and look at the settings in the curve and surface box. Click on curvestretch and you should se your array of planes stretch todo the end of the curve.
select the array, change x under relative offset todo 1. 000, select the curve, turn on curve stretch;. 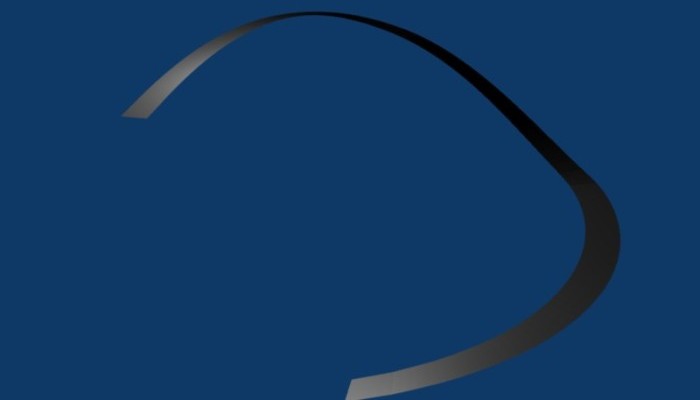