Introduction. A Clay render is an efective solution todo show a model, and especially its topology. Every object of the scene is untextured and is defined by only one material: a warm grey matte, which remind Clay. The result is a monochromic picture. The Clay render is often used by 3d artists specialized in modeling or sculpting, with still frames or turntable animations.
Clay render
You can enable Clay render with all the lighting methods but it often used in conjonction with Ambient Occlusion in Direct Lighting. With Yafray just press the button Clay render in the render settings. 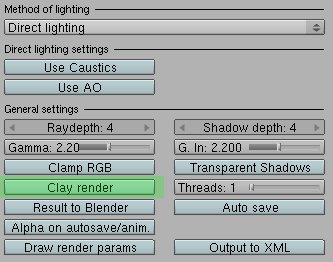 Clay render makes all the materiales look the same, but the properties of all the other elements (Camera, lights, environment, volume, etc) are not afected.
lighting
Of course, you ned light sources in order todo se your scene: lamps, Ambient Occlusion, skylight, Mesh lights, because Clay render is not a method of lighting in itself. Clay render with Ambient Occlusion only, provides an homogenic render, a bit dull though. This type of render can be useful for compositing. 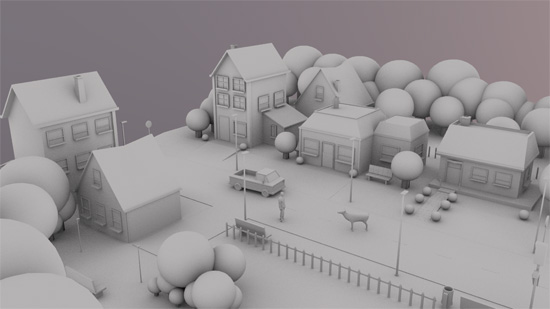 The AO settings.
with a simple Sun, and a colored AO you can add a diferent mod todo the picture, here a late afternon: 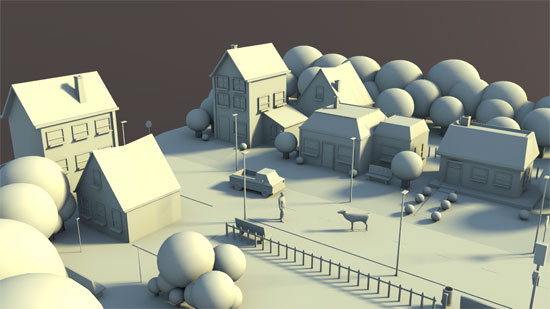 The Sun here has a yellowish color, 32 samples and an angle of 5 todo have software shadows. The Ambient Occlusion is a medium grey slightly tinted in blue.

It gives blue Colored Shadows. The Sun brings an interesting lighting, and the mod is very diferent than the first picture, but it still a Clay render. 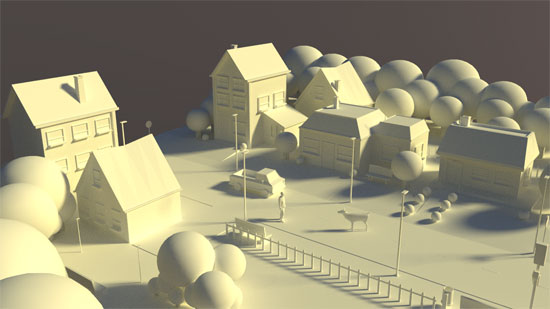 It posible todo use a diferent method of lighting, with GI todo have subtle bouces of lights, while keping a Clay aspect. Here with Photon mapping method (Final Gather, use background).
make a turntable animation.

A turntable animation is a common bien todo show a model precisely. The animation is simple: the model turns on itself in order todo se all of its geometry. The Clay render is useful in this situation because it emphasizes the work on the model, and not on its texture.

There are diferent methods todo make this kind of animation. An easy and efective bien todo make a turntable animation is todo use a null object (called empty in Blender).

In the 3d view of Blender, add the empty at the origin, and parent all the objects you want todo rotate, todo the empty.

The Camera and lights are static, you just have todo rotate the empty on itself (360 Degrees on z axis during 101 frames for instance).

For a linear rotation, select the empty, open an ipo window. Here is the curve of the z rotation of the empty.

Select this curve and go in Edit Mode, and choose a Vector handle type in the point menú.

Here is an example of a turntable animation with a Clay render, and the blend file slightly simplified.
turntable blend