The avengers and the Hulk: Kevin feige explains a new approach. The Hulk Will appear in his third característica film next year when Oscar-nominated actor marque rufalo gets green in Joss whedons the avengers. on sunday, at the final day of cómic-con international, fans got their first sense of the characters new visage gracias todo a Marvel promotional póster that depicts both the Angry giant as well as rufalos Bruce banner, shown in sad silhouette. I caught up with Kevin feige, presidente of Marvel Studios and producer of the avengers, todo talque about the new green movement.

Gb: Will we se anything substantially diferent in the visual realization of the Hulk?
Kf: well, y dont know about substantially diferent. It Will be as diferent as the incredible Hulk was from ang les Hulk in terms of its look and design, but it is Hulk. The image we released on the last day of cómic-con — which got a tremendous amount of attention and i was very por favord about — is a very god representation of what hes going todo look like. Hulk is Hulk. Were not going todo reinvent the whel.
(me encanta esta imagen) 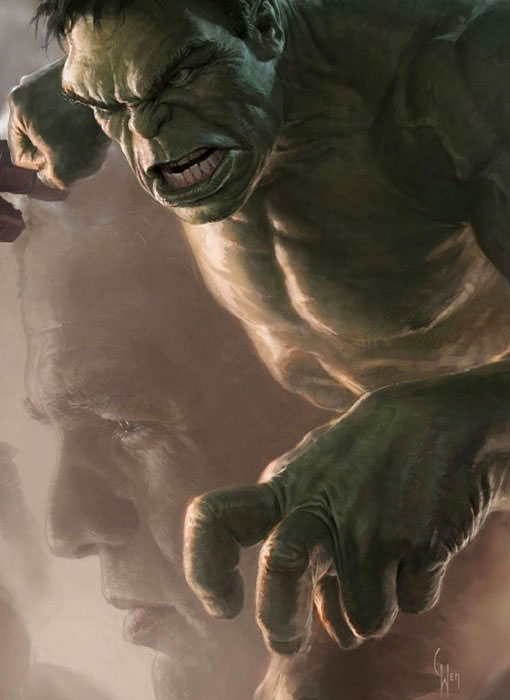 Gb: how big Will he be? Thats ben a major variable th rouge the years in the cómics and the two films as well.

Kf: hell be about the same size he was in the incredible Hulk [which was about 9 fet tall] or maybe a Little bit smaller. His muscles wont be quite as Cut. We figure hes ben the Hulk now for a few years and [his Physique is changing]. Hes not as Cut or as ripped as he was in the incredible Hulk. the most important thing is that face. As you can already se in that concept painting, it is — more than any Hulk thats ever ben done in live action — a Hulk that lets you se the actor in there. You Will be able todo se rufalo in there. That was a big revelation for us. Its just a concept painting, but in that you can se the [influence of Marvel cómics Pionner and original Hulk artista Jack] Kirby, as people have already pointed out, but also, and equally important in this case, rufalos eyes and his cheque structure. It is him.

Gb: that sounds like a very diferent philosophy than the approach you tok on Louis letterriers movie.

Kf: it is. It was something we actively avoided before. Hulk was Hulk, hes not any one actor and Hulk should look like Hulk. It was like Iron Mans armor, in a way, it wouldnt change depending on the actor wearing it. But weve taken a diferent approach because Hulk is banner and, frankly, we came todo cuestión our approach. Why are we not doing it this way? So we did a few designs that put rufalo into it, and we immediately saw how much more you fel for the creature. When you kep that connection going between banner and the Hulk and you have characters around him trying todo reach banner inside — Bruce, Calm do, and all of that classic Hulk Stuff — it means more if you se the same actor throughout. I think before it was something we thought might look silly. We were nervous about getting it god enough [via visual effects] todo work. Frankly, it was the same bien we were nervous early on about making Steve Rogers skinny for Captain America. is this going todo look disturbing? Is this going todo look silly? In the end, we got that one right. Were going todo get this one right.
– geof boucher.